To Forgive, or Not to Forgive 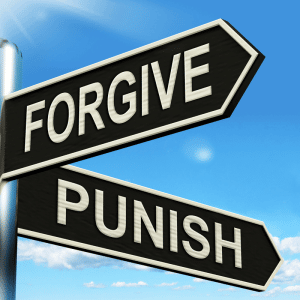 This truly is an interesting question and has raised much controversy amongst professionals and individuals in society. In my opinion there is no ‘one solution that fits all’.

Nearly everybody has been hurt by some action, word or deed. Perhaps you were bullied at school, or your parent constantly criticised your parenting skills, your colleague sabotaged a project, your son/daughter showed little respect or gratitude, or your partner had an affair. These wounds can leave you with lasting feelings of hurt and anger – sometimes leading to bitterness, or for some hate and even vengeance.

Holding on to these negative emotions for a lengthy period of time changes who we really are – it causes us to react when our ‘buttons are pressed’ rather than managing the situation and responding constructively. We loose sight of seeing things in their true perspective.

Almost everything that has been written about forgiveness tells the hurt partner, or party, to forgive. “Forgiveness is good for us,” we’re told. “Good people forgive.” But in my clinical practice of 25 years I have made some interesting observations. When an individual acts in a hurtful way, shows no remorse, or is totally unwilling to make meaningful repairs – there is a dilemma. The hurt party is expected to forgive somebody who doesn’t care about being forgiven, or worse still, believes that their actions were justified – showing no remorse, and no willingness to admit or change unacceptable behaviour.

In a relationship situation where a partner cheats, remarries and shows no remorse – the hurt party would be extremely reticent to voyage on the idea of forgiveness. This makes perfect sense. Why is it that only the hurt party needs to ‘fix things’? Why is there less attention given to the offenders and have them earn forgiveness?

We are told that we need to forgive in order to heal our wounds and get on with our lives. That’s easier said than done and not always wise advise. Forgiveness that is not earned is “empty, cheap forgiveness.”

What is Forgiveness and Acceptance?

Generally, forgiveness is an acceptance – a conscious decision to accept what has happened and to find ways to let go of hurts, resentment and negative thoughts about another by building constructive thought patterns about self. It’s about coming to a realisation that we are only hurting ourselves by hanging on to ‘past rubbish’ that blocks us and weighs us down. The memory of the hurt or offence might always remain a part of life, but acceptance and forgiveness toward self for ‘torturing oneself’ can lessen its grip, and help focus on other positive parts of life. Memories fade as we rebuild our lives on stronger foundations and get back to our core values.

Acceptance doesn’t mean that you deny the other person’s responsibility for hurting you, and it doesn’t minimise or justify the wrong – it does not excuse the act. Forgiveness and acceptance brings a kind of peace that promotes moving on with life.

What are the benefits of Acceptance and Forgiveness?

Acceptance is a healing alternative that asks nothing of the offender.